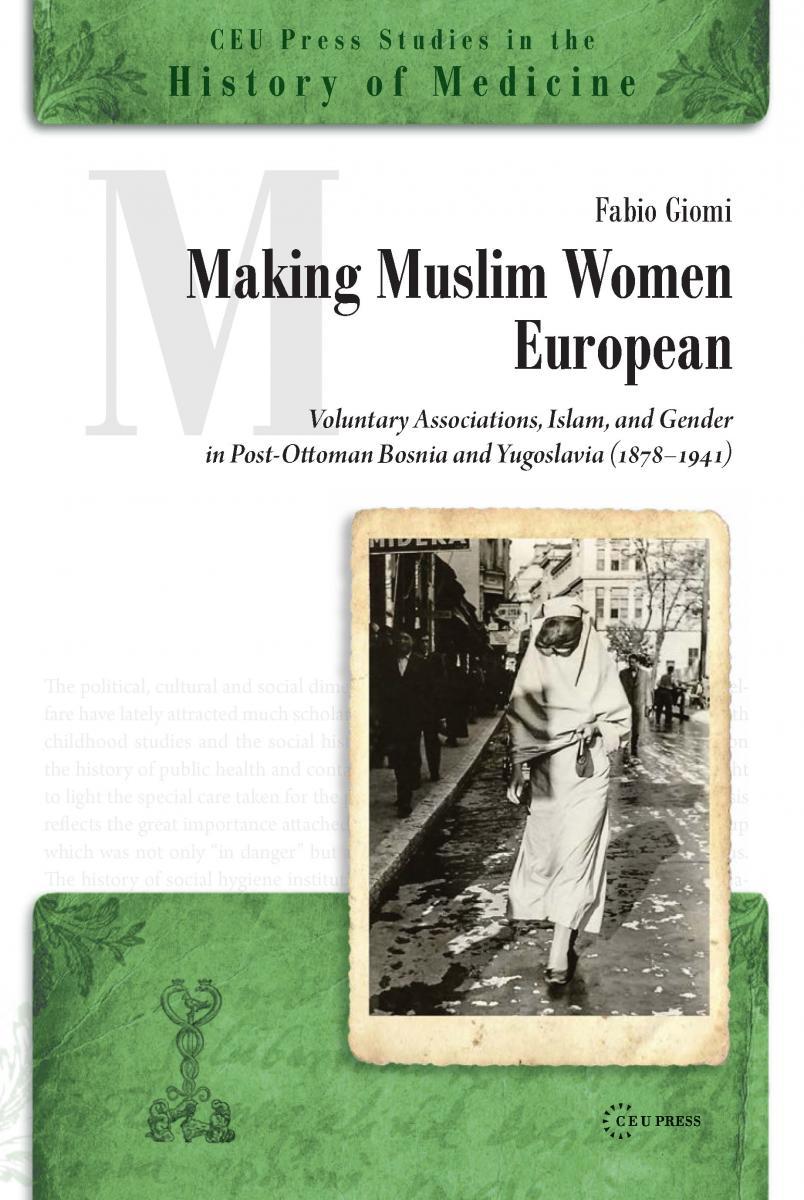 YUGOSLAV THEMES ACROSS A VARIETY OF CEU PRESS PUBLICATIONS

This compilation features books of the Central European University Press, published since its establishment in 1993, that have some relevance to Yugoslavia, its history , peoples and culture. After the latest release, titles in the backlist are arranged by content: contemporary topics are on top, older themes below. For more substantial information about the content and availability, please click on the covers of the book, or on the links inserted into the citations.

“Unveiling women became the condition, and even the very metaphor, for the integration of Bosnian Muslims into the broader national community, be it Serbian, Croatian or Yugoslav.”—muslim women within the Yugoslav modernization.
“The vigorous pro-Serbian shift affected the activities of the local branches. After repeated calls from the Central Branch, Gajret female volunteers began collaborating regularly with Serbian philanthropic associations, particularly with Kolo Srpskih Sestara.”
“The leaders of the association considered Slavic speaking Muslims to belong to the Serbian nation.”
“By the early thirties, in the universities of the Yugoslav kingdom it was not unusual to receive clandestine flyers rejoicing the ongoing ‘crisis of capitalism,’ while at the same time shouting a ‘hurrah to the Third International, principal guide of world revolution.’”

“Yugoslav workers tended to contrast the privileges of communist functionaries in their immediate surroundings to the idealized image of communists of the past or the virtues of the highest party leadership. The manual workers’ allegiance was not to the party, but to Tito and the general values of the revolution”—workers' shop floor activities in communist Yugoslavia.
“The youth occupied a sacred place: the prewar communist party had its base in the universities and the partisan battalions during World War Two were made up mostly of young peasants.”
“Slogans such as ‘We want Sloba’ could be heard coming from parts of the crowd. As the police pushed the column away from the Parliament entrance, many workers confronted the uniformed men with cries of ‘Go to Kosovo.’”
“The Yugoslav state started to dissolve and the working class found itself in a desolate position, having to invent new organizational patterns and traditions amidst rampant nationalism, war, and economic breakdown.”

Books from the backlist with a Yugoslav focus, going backwards in time:

When published in Belgrade in 1978, Avala is Falling “was greeted as an example of a kind of text described as ‘jeans-prose’ because of the narrative style: a first-person narrator’s rebellious, youthful tone, colored by adolescent slang. She is seen to use her body as a way of understanding herself and her position in the world.”— about the novel in Voices in the Shadows.
The author, Biljana Jovanović (1953-1996), “was among the first women writers to introduce a new kind of self-conscious female character to South-Slavic literature. The novels are peppered with references to everyday life under former Yugoslav ‘soft communism’.”—from the Biographical Dictionary.

“The most popular local Western hero was Harry Jackson, the ‘cowboy from Bijeljina.’ This was actually Aljuš Musli, the owner of the camera shop named ‘Western’ in that small Bosnian town.”—from a monograph on the Americanization of Yugoslav culture in the sixties.
“Out of all the off-Broadway troupes, Living Theater toured Yugoslavia as early as 1966, giving performances in Sarajevo, Mostar, Zenica, and Banjaluka.”
“Pepsi-Cola was produced in Serbia, this American product had a Yugoslav character, because the bottles were made in a glass factory in Paracin (Serbia), the caps in Ljubljana (Slovenia), and the crates in Ajdovscina (Slovenia) and Kavadarci (Macedonia).”

“The judge begins to explain the difference between the Soviet, namely ‘Cominform’s,’ communism, and ‘our’ communism. Before long the boy interrupted, and excitedly said, with tears in his eyes: ‘But Comrade Judge, I don’t even like our one, let alone that other one!’”
Emblematic lawsuits from the archive of a small-town law office.
“In the ’60s, Trieste somehow became part of our life again because people from all over Yugoslavia would go shopping there. Not only from the Croat and Slovene regions close to Trieste, but even from Serbia, spending a whole night on the train.”
“Under Tito, the restaurant’s name was changed to Zagreb as a symbol of brotherhood between the nations of Yugoslavia. Under Milošević, the name Ruski Tsar was restored. Not long ago, the place was taken over by an international chain of Italian restaurants, and now it is called Vapiano.”

“General Badoglio, the deputy chief of staff, received a ‘plan for action among the Yugoslavs’ from Trieste, which emphasized strong anti-Serbian currents in Croatia, Slovenia, Bosnia, Montenegro, and Macedonia, and proposed use of widespread propaganda to incite the local populations’ separatist tendencies.”– from a monograph on the Croatian fascist leader.
“Jasenovac was the symbol of the annihilation policy applied by the Independent State of Croatia during the four years of its existence. Most Croats not only did not take part in the crimes committed by the Ustasha, but also were frequently victims themselves.”

Other books on the CEU Press back list, going backwards in time:

“National demagoguery flourished and culminated during World War II in a bloody civil war between Yugoslav communist partisans on the one side and Serb royalists and Croat fascist-Nazi collaborators on the other.”
This volume discusses eighteen populists from twelve European countries over the past hundred years.
“Three nationalist demagogues, Slobodan Milosević, Alija Izetbegović, and Franjo Tudman, mobilized three distinct ethnic (in reality ethnically mixed) parts of the country (Serbia, Bosnia, and Croatia), and fought a protracted civil war that horrified Europe.”
“Western intervention and the positive influence of the European Union only gradually stabilized the peace and assured the political normalization and democratization in the Balkans. None of this could have happened without ridding the region of its nationalist demagogues.”

(July 1991) Bush: Germany came forward with the recognition of Slovenia. Maybe we should opt for a short statement consisting of two-three declarations. We could note our concern about the events in Yugoslavia, call on everyone to respect the ceasefire, and condemn the use of force to deal with political problems. Let the Yugoslavs decide their own fate through negotiations.
Sentences taken from the last face-to-face conversations of Cold War leaders.
Baker: We should avoid loaded wording like territorial integrity and self-determination. Self-determination is what the Germans are insisting on.
Gorbachev: I will speak on the essence of this issue. Before the start of this conversation, when the President was walking toward the building, Mr. Scowcroft and I had a conversation. I told him that even a partial breakup of Yugoslavia could create a chain reaction that will be worse than a nuclear reaction.

“Unlike their counterparts in the Eastern European and Soviet regimes, who often were unable to publish their work at all and had, instead, to circulate it clandestinely in samizdat editions, the writers in Croatia and Serbia were mostly able, between 1965 and 1991, to publish their work and receive reviews, national awards and other forms of state and public recognition.”—from a book on the transnational dimensions of literature.
“In the Cold War 1960s, Yugoslavia caught the imagination of readers abroad as a socialist country outside the Soviet sphere of influence. This became a magnet for both readers and publishers, especially after Ivo Andrić received the Nobel Prize for Literature in 1961. Harcourt Brace Jovanovich broke ground, publishing chiefly critical intellectual writers from Serbia and Montenegro.”

“Many on the Western European left were fascinated with the Yugoslav model of self-management, a potentially viable ‘third way’ between Western-style capitalisms and Soviet-style planned economies.”—from a book on labor under communism.
“Around noon on October 15, 1958, six workers rushed out of the reactor hall and started yelling for help… Less than 24 hours after the accident they were flown to the Fondation Curie hospital in Paris.”
“In February 1969, in the Trudbenik textile factory in Banja Luka, after complaints of low wages, corruption, and harassment towards female workers by the male factory director and his collaborators, the 220 workers were successful in having all the management removed from the factory.”
“Workers who had contact with the West, whether as a guest worker or through tourism, and who were dissatisfied with the failure of redistribution of housing and income, hoped not for a ‘passage to capitalism’ but a deepening of socialism with a stronger market influence.”

“Hitler decided to send a large invasion force into Yugoslavia. Local resistance not only delayed the inception of Operation Barbarossa but also required that Berlin station troops in Croatia and Serbia in order to support the local collaborationist regimes.”—from a monograph on alternatives to democracy.
“The Yugoslavs’ divergent path to socialism was both a response to the crisis created by Stalin in 1947–48, and a source for renewed arguments between the Soviet and Yugoslav communist parties.”
“The two multiethnic states which have fallen apart in the past seventy years—Yugoslavia and the Soviet Union—were not democracies but decaying one-party systems operating under communist hegemony.”

“In 1938, the book Ekonomska podloga hrvatskog nacionalnog pitanja by Rudolf Bicanic claimed that in comparison with Serbia the amount of taxes collected for each inhabitant of Croatia was twofold, in Slovenia almost threefold, and in Vojvodina fivefold.”—from a collection of essays on the nationalism-economy nexus.
“In the mid-1980s a group of Serbian members of the Academy presented their outlook on Serbia in the Yugoslav state in a memorandum. The authors stated that in Yugoslavia after 1945, Serbia had been politically and economically inferior, even discriminated against.”
“Serbian politicians introduced an economic boycott against Slovenia.The effect of the boycott in fact had the opposite effect, since it only accelerated the actual disintegration of the Yugoslav state.”

“As its very name suggests, the Kingdom of Serbs, Croats, and Slovenes faced great complexities. At the general census of 1931, its 14 million citizens did not declare their nationality, only language and religion.”—from the volume on intellectuals and the totalitarian temptation.
“In its Serbo-Croatian (etničko čišćenje) and Romanian form (purificare etnică), the term ethnic cleansing was coined before World War II to further the ethnic homogenization of the Romanian and Yugoslav nation-building projects.”
“Yugoslavia presents a striking case of humiliating dissolution followed by frustration and resentment. In April 1941, it was attacked, defeated, and partitioned by the Axis. What followed was four years best described as bellum omni contra omnes.”
The reader follows the historian Vasa Čubrilović’s road from the Young Bosnia conspiracy in 1914 through an ethnic cleansing campaigner in 1944 to an opponent of the spirit of the SANU Memorandum in 1986.

“There are two dominant topics in recent Serbian historiography on the interwar period, the institutional/governmental apparatus of the Kingdom of Yugoslavia, and the ethnic conflicts, between Serbs and Croats.”—from the collection of excerpts from studies over the precommunist period by younger scholars of the region.
“There exists more or less a consensus in Croatia about royal Yugoslavia. And the consensus is that the first Yugoslavia, and more broadly any Yugoslav state, was bad.”
“World War II-era anti-fascist Partisans, as irregular armed groups, inherited the mantle of the heroic outlaw bands that helped fight for independence in the nineteenth and early twentieth centuries.”
“The major part of international funding went to research projects dealing with Yugoslav minorities, but also the region’s mental mapping of mutual perception, self-representation, various stereotypes, et cetera.”