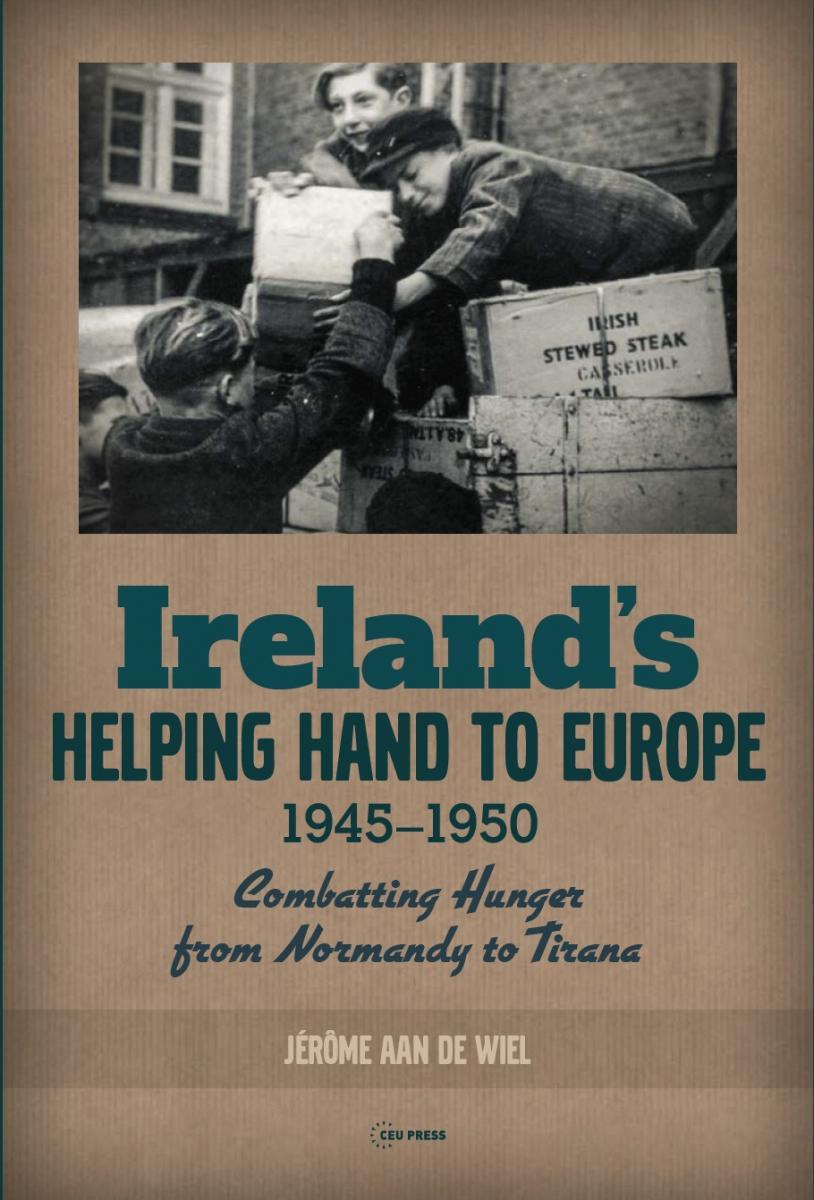 This compilation features books of the Central European University Press, published since its establishment in 1993, that have some relevance to World War Two. After the latest releases, you can browse for related topics in the books on the backlist of the Press. For more substantial information about the content and availability, please click on the covers of the book, or on the links inserted into the description.

“Italy had been unprepared for war, militarily or economically. The Fascists were never able to organise an efficient food supply and distribution system. Right from the beginning of the war, the population had to cope with major shortages, and this in turn led to a widespread black market.”—Ireland's Helping Hand to Europe.
“Although largely forgotten or unknown, Italy had also been very heavily bombed by the Allies. Rome alone suffered more from bombing than all the British cities combined during the Luftwaffe’s raids. The number of deaths for the entire country is estimated to be at around 60,000.”
“The Germans even initiated a form of biological warfare by facilitating the spread of malaria in the Latina province (Pontine Marshes) where 54,929 cases were recorded in 1944.”
“Thanks to de Valera’s diplomatic initiatives, no fighting in Rome occurred as the Wehrmacht withdrew. Again, the Pope was deeply appreciative of the Taoiseach’s efforts.”

“The war is known as World War II, and the term ‘Great Patriotic War’ is completely rejected; for example, World War II is commemorated on May 8 with a poppy instead of the Soviet anniversary on May 9, which is symbolized by the Soviet carnation. The occasional inclusion of Holocaust stories in the general representation of the war can also be considered a departure from the Soviet canon and, at the same time, an attempt to show Ukraine’s proximity to ‘European standards.’”—Memory Crash.
“In April 2015, a new law completely transformed the memory narrative about World War II. It removed Soviet formulas from commemorations of the war; the ‘Victory in the Great Patriotic War of 1941–1945’ mutated into the ‘Victory over Nazism in World War II.’ The label of ‘Victory Day,’ which had been traditionally celebrated on May 9, also changed; the new official name of the holiday was the ‘Day of Victory over Nazism in World War II.’”

“The Nazi occupation authorities flirted with local national symbolism and traditions in their attempts to co-opt Baltic populations for their own cause during World War II. The fact that the seemingly internationalist Soviet Red Army proceeded in a similar vein is less known.”—Defining Latvia.
"The Soviet Union established the 201st Latvian Rifle Division as its first new national formation in the Red Army; it was later renamed the 43rd Guards Latvian Rifle Division and grouped with the 308th Latvian Rifle Division in July 1944 to form the 130th Latvian Rifle Corps, which was given the mission of ‘liberating’ Latvia from German occupation.”
“In February 1943 Nazi Germany authorized the creation of a ‘Latvian Legion’ subordinated to the Waffen-SS, ultimately consisting of the 15th Waffen Grenadier Division of the SS (1st Latvian) and the 19th Waffen Grenadier Division of the SS (2nd Latvian). These units were given the task of ‘national defense’ against renewed Soviet occupation.”

Books with reference to World War Two from the CEU Press backlist:

“When war broke out in Europe, morale in Tokyo was low. On August 23, 1939, when Germany announced that it had concluded a so-called non-aggression pact with the USSR, the Japanese—to a man—felt that the anti-Comintern pact had been violated.”—Wars and Betweenness.
“On June 23, Vyacheslav M. Molotov, declared to the Hungarian envoy in Moscow, that the Soviet Union had no objections to the Second Vienna Award. However, this declaration did not prevent Budapest from joining the German invasion on June 27, 1941.”
“Moscow—while ordering the military districts of the Western Soviet border to resist the German assault by any means possible—initially forbade any air attack on Romanian and Finnish territories.”
“The USSR demanded that the UK declare war on Romania and Hungary. Churchill hesitated until when the Red Army began to push back the German forces. The British declaration of war on Hungary and Romania (as well as Finland) was issued on December 5, 1941, a few days before the US entered World War II.”

“The establishment of Soviet rule in September 1939 was treated like the liberation of Ukrainians from the social and national oppression of Polish masters. Official narratives of World War II did not mention the overwhelming Polish majority in the city during the German occupation, the Polish underground movement and the Poles’ role in reconquering the city from the Germans.”—Lviv and Wrocław, Cities in Parallel?
“After the German occupation and the destruction of the Jewish population in Lviv in 1944, less than 1% of those who survived remained. With the re-establishment of Soviet rule, Poles were deported to Poland in 1944–1946.”
“The Jewish pogrom itself of 1941 was not spoken of, nor was the participation of part of the Ukrainian nationalist forces in it, which corresponds to today’s distorted academic discourse about Lviv’s history during World War II.”
“Wrocław is a very good example, as the largest city in Europe and the world where a complete population exchange took place as a result of World War II.”

“When the Soviet army marched into Kaunas on June 15, 1940, none of us met its soldiers joyfully—we all knew that no good would come of their arrival.”—Life Should Be Transparent.
“To the Lithuanians, the beginning of the war and the German occupation looked like they would bring liberation from the ‘red plague’—from the horrors of the deportations.”
“There was a shortage of blood for injured German soldiers and Jewish children were in demand as blood donors. Dr. Rudaitis did not let the Gestapo have a single one of the children in the nursery.”
“A German tank stood hidden behind a chapel on Pranciškonų Street, which runs into Trakų Street. As the Russian soldiers approached the chapel, the tank drove into Trakų Street and opened fire. All of the Russian soldiers were killed.”

“The reasons that compelled Mussolini temporarily to remain neutral in 1939 were his indecisiveness as to which side to take, and the country’s lack of military preparation. Regarding old powers as declining, Mussolini sided with ‘virile’ Germany.”—Stalin’s Italian Prisoners of War.
“In mid-August 1941, the Pasubio Division was the first to take action in the war alongside the Germans, annihilating the Soviet forces remaining between the Dnieper and Bug rivers.”
“The Italian war effort increased when the ARMIR (the Ital­ian Army in Russia) set off for the USSR—290,000 units strong—in the summer of 1942.”
“The variety of motor vehicles, made up of seven different brands (Fiat, Alfa, Lancia, Isotta Fraschini, Bianchi, Om, and Spa), complicated the distribution of spare parts, often stored in warehouses some 400 kilometers from the battle lines.”
“Togliatti and Stalin discussed about setting up an Italian contingent, which would be made up of communists and antifascists recruited among the prisoners of war.”