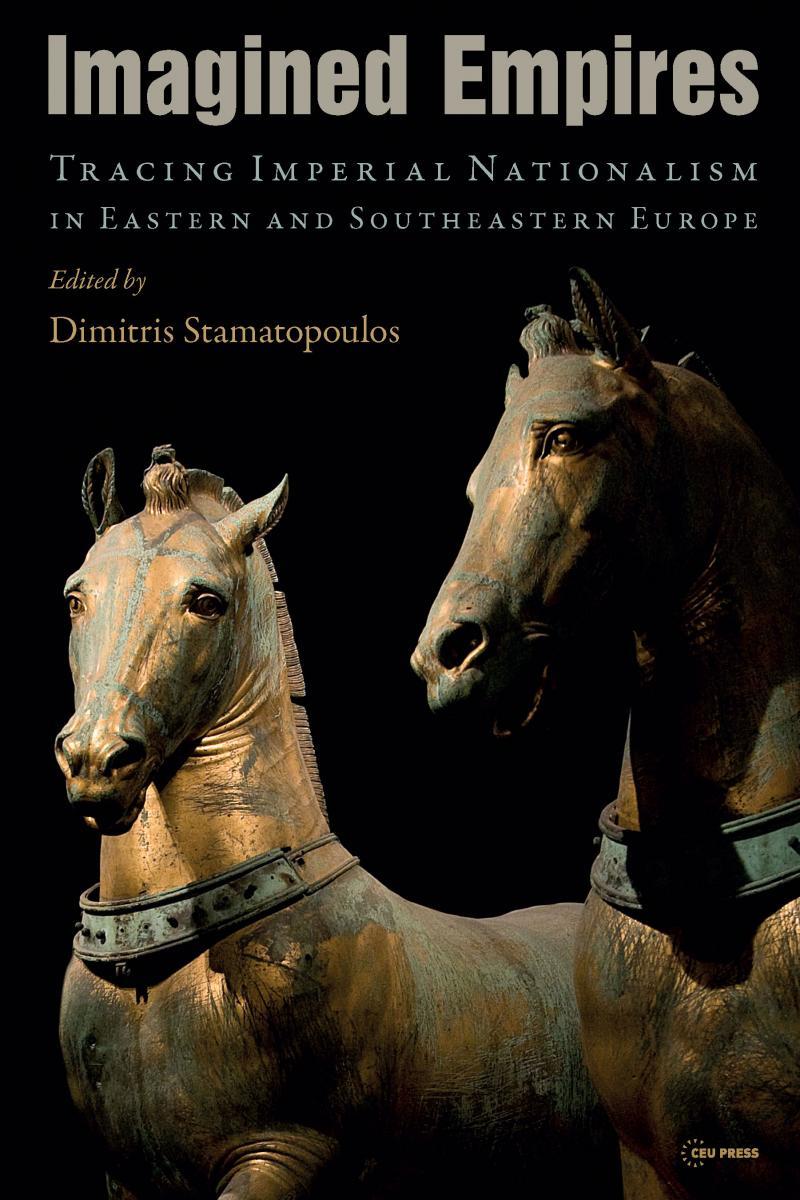 THEMES OF NORTH MACEDONIA ACROSS A VARIETY OF CEU PRESS PUBLICATIONS

This compilation features books of the Central European University Press, published since its establishment in 1993, that have some relevance to North Macedonia, its history and culture. After the latest release, titles in the backlist are arranged by content: contemporary topics are on top, older themes below. For more substantial information about the content and availability, please click on the covers of the book, or on the links inserted into the citations.

“The Macedonians contest the Bulgarians’ claim to the first Bulgarian Empire by saying that it was actually created by the Macedonians."—Words in Space and Time.
“In 1943 a Bulgarian-language university was founded at Skopje. At the end of World War Two the communist Yugoslav authorities recognized Macedonian as a language in 1944. During the latter half of the 1940s this institution was gradually revived, and finally, in 1949, officially made into the first ever Macedonian-medium university.”
“Macedonia’s Slavic vernacular was standardized with the use of the Serbian Cyrillic into a Macedonian language, thus making it different vis-a-vis Bulgarian with its own specific form of Cyrillic.”
“The 1946–1949 Greek Civil War between pro-Soviet communists and pro-Western democrats was the first Cold War style proxy war fought between the West and the Soviet Union. The Greek communists lost, among whom there were many Slavophone Macedonians, as well.”

“Pavlos Karolidis insisted that there were only Greeks in Macedonia. Local non-Greek speaking Christians were being forcibly compelled by the Bulgarian authorities and bandits to think of themselves as Bulgarians just because they spoke the Bulgarian vernacular. In actuality, according to Karolidis, as long as they had retained their identity as Orthodox Christians, they were Greeks.”—Imagined Empires
“Definitive distinctions between the Slavonic dialects did not exist, and their national selfidentity depended on the propaganda of political agents and their church orientation.”
“The Russian government did not have a firm opinion on the nationality of the Macedonian Slavs; it depended on the political situation of the moment.”
“Uskub (Skopje), Bitola, Adrianople (Edirne), Drama, and Kavala became centers of the struggle. For two decades Macedonia was a battlefield of guerilla action between Bulgarian and Greek armed bands, who terrorized the peasants and demanded loyalty from them.”

“North Macedoniais a highly patronalistic country where regime-specific features (divided executive power) and country-specific features (ethnic cleavages) together ensured competition of patronal networks for more than a decade after the regime change. The two patronal networks could together carry out an anti-democratic transformation where we can discover signs of:

… taken from the momentous endeavor of analyzing post-communist regimes.
“Running the state as a criminal organization, the chief patron risks persecution and going into prison if he loses. Nikola Gruevski has managed to escape with the help of the Macedonian and Hungarian secret services.“

“At 9% share for the three channels, Macedonian public television probably has the lowest audience figures from all included countries.”—Up in the Air?
“In December 2015 only five out of 720 public service media employees in North Macedonia were regarded as having fixed-term employment conditions.”
“The newsrooms in Macedonian and in the lan­guages of non-majority communities (especially the newsroom in the Albanian language) function as separate, parallel worlds that primarily focus on their ethnic community and frame and observe the events predominantly from the point of view of their own community.”
“The public service broadcaster has been acting as a means of disintegration rather than one of social cohesion.”

“The Macedonian-language media has a more balanced coverage of regional and international news, while domestically it offers little information on the activities of ethnic minority parties.”
Assessing the international media assistance in the Balkans.
“In 2009, the government bought advertising for €17 million, which rendered it the second largest advertiser in the country. Also the government has been accused of a lack of transparency in the way it chooses media outlets for its advertisements.”
“The European Commission in its annual progress reports on Macedonia could not criticize the work of the Broadcasting Council as an obstacle to the future EU accession of the country.”
“The United States remains hugely important as a diplomatic player in Macedonia and the region; its indifference to public broadcasting services may have encouraged the government to reject European advice about how best to fund it.”

“The development of intellectual property law in Macedonia took place in three broad phases: 1) from 1913 to 1945; 2) from 1945 to 1991; and 3) from 1991 to the present day.”
A book on the expansion and institutionalization of intellectual property norms in Europe.
“The 1978 law on copyright remained in force for five years after Macedonia’s declaration of independence in 1991.”
“The country clearly strove to improve intellectual property rights protection in order to implement the integration process with the aim of starting negotiations with the Union. The overall process is often perceived to follow a carrot-and-stick approach. The case of Macedonia is not unique. Other countries which became EU members over the last decade went through the same process of approximation and harmonization.”

“The Bulgarian Army occu­pied large parts of Vardar Macedonia and Aegean Thrace. The Bulgarian Parliament granted Bulgarian citizenship to the population of the newly ‘liberated’ re­gions with the exception of the Jews.”
A book on recent developments in postcommunist memory politics.
“The matter has become even more complicated in the context of the complex Bulgarian-Macedonian relations in the realm of history, and the Bulgarian sensitivity toward a number of Macedonian lieux de mémoire. The opening of the Holocaust Memorial Centre in Skopje is seen by some vocal public figures in Bulgaria as part of politics of memory aiming to inaugurate a particular reading of Macedonian history with an anti-Bulgarian thrust.”
“A major collection of archival doc­uments—a total of 609 documents on 1,750 pages—on the deporta­tion of the Jews from Macedonia and Thrace merits special mention in this respect. Unprecedented in its scope and richness, the collection sheds light on the life of the local Jewish communities under Bulgari­an occupation.

”Gorbachev. I promise you that tomorrow there will be talk of Poland’s western territories, about Transylvania, Macedonia. About a million Turks live in Bulgaria. In a word, if we do not keep the issue of territorial integrity and inviolability of borders under control, chaos will break out from which we will never extricate ourselves.—from the minutes of the last superpower summit in 1991.
Baker. Here is the problem. The specific mention of territorial integrity and unity would be problematic.
Bush. We could note our concern about the events in Yugoslavia, call on everyone to respect the ceasefire, and condemn the use of force to deal with political problems. Let the Yugoslavs decide their own fate through negotiations.
Baker. We are in favor of a peaceful settlement; we are against unilateral actions that would anticipate the results of the settlement. We should avoid loaded wording like territorial integrity and self-determination. Self-determination is what the Germans are insisting on.
Gorbachev. I will speak on the essence of this issue. Even a partial breakup of Yugoslavia could create a chain reaction that will be worse than a nuclear reaction.

“By 1969, there were Kennedy Streets in Skopje, Zagreb, and Belgrade.”
A monograph on the Americanization of Yugoslav culture in the sixties.
“Pepsi-Cola was produced in Serbia, this American product had a Yugoslav character, because the bottles were made in a glass factory in Paraćin (Serbia), the caps in Ljubljana (Slovenia), and the crates in Ajdovščina (Slovenia) and Kavadarci (Macedonia).”
“The number of rock and roll groups grew exponentially. Among the bands from Skopje the best known were the No-Names and the Pearls.”

“General Badoglio, the deputy chief of staff, received a ‘plan for action among the Yugoslavs’ from Trieste, which emphasized strong anti-Serbian currents in Croatia, Slovenia, Bosnia, Montenegro, and Macedonia, and proposed use of ‘widespread propaganda to incite the local populations’ separatist tendencies” – from a monograph on the Croatian fascist leader.
Pavelić’s prestige spiked in December, when he appeared in Skopje in his capacity as a lawyer to defend twenty students accused of belong­ing to a Macedonian separatist organization.
The Serbian police had pressured the accused in a number of ways, even resorting to torture to coerce them into providing false accounts of the events. Pavelić en­couraged them to speak out, and turned the trial into an indictment of the abuse of power perpetrated by the Macedonian police.

“Paramilitary networks staged violent incursions into Ottoman Macedonia, and most notably led the Ilinden rising in 1903 with the involvement of up to 26,000 guerrillas.”— from studies over the precommunist period by scholars of the region.
“The tables turn dramatically, when an armed irregular group is viewed as being in the service of a rival national movement. Thus, the Bulgarian or Macedonian komitadjii evoke special dread in the Greek context, the Greek andartes do so for Bulgarians and Macedonians.”
“Christians from geographic Macedonia who participated in pro-Greek or pro-Serbian paramilitary formations are often referred to as grkomani and srbomani—deluded or traitorous ethnic Bulgarians or Macedonians with false Greek or Serb consciousness.”
“In May 1923, a Komitadji company of seventy men came to Smokvice (District of Đevđelija) and forced the locals to swear an oath to the Revolutionary Committee and to give a statement they would fight for the liberation of Macedonia.”

“In 1878, the region of Macedonia, which comprised roughly three provinces (Kosovo, Selanik, and Monastir), was returned to the Ottoman Empire on the condition of reform, especially improving the plight of the Christian population.”
The turbulent decades after the Russo-Ottoman War are explored with the ownership of land in focus.
“Ottoman Macedonia became a site of violent and bloody conflicts between the Exarchate and the Patriarchate as well as among armed bands associated with both or with Bulgaria or Greece. All fought over the loyalties of the Orthodox Christians, advancing autonomy or independence for Macedonia or, in the case of Bulgaria and Greece, advancing territorial claims, all the while terrorizing Orthodox Christians as well as Muslims.”
“In the Ilinden Uprising the violent nationalism of Christian Slavs in Macedonia horrified Turkish and Albanian Muslims, thereby severely undermining Bulgarian territorial bids to this heterogeneous region.”

“The struggle for Macedonia emerged out of the post-Congress of Berlin climate of insecurity about the Ottoman Empire’s near future.”
By exploring the development of ethnic diversity and national tensions, this book challenges the readers to engage in a new way of thinking about Balkan studies.
“Not everyone saw the Ottoman state as illegitimate and defunct—even among the Christian peasantry—nor were they ready to throw in their lot with one of the nascent national causes.”
“The recognition of a Macedonian nation in Tito’s vision of a resurrected Yugoslavia brought some stability to that area.”
“Bulgarian politicians were the first to recognize the independence of Macedonia in 1992, but they continue to treat the Macedonian language as a Bulgarian dialect.”
“In much of Greek Macedonia, many people who still speak Macedonian have a Macedonian identity when they are able to—and not afraid to—express it.”

Further titles with relevance to the history and people of Macedonia (going backwards in time):