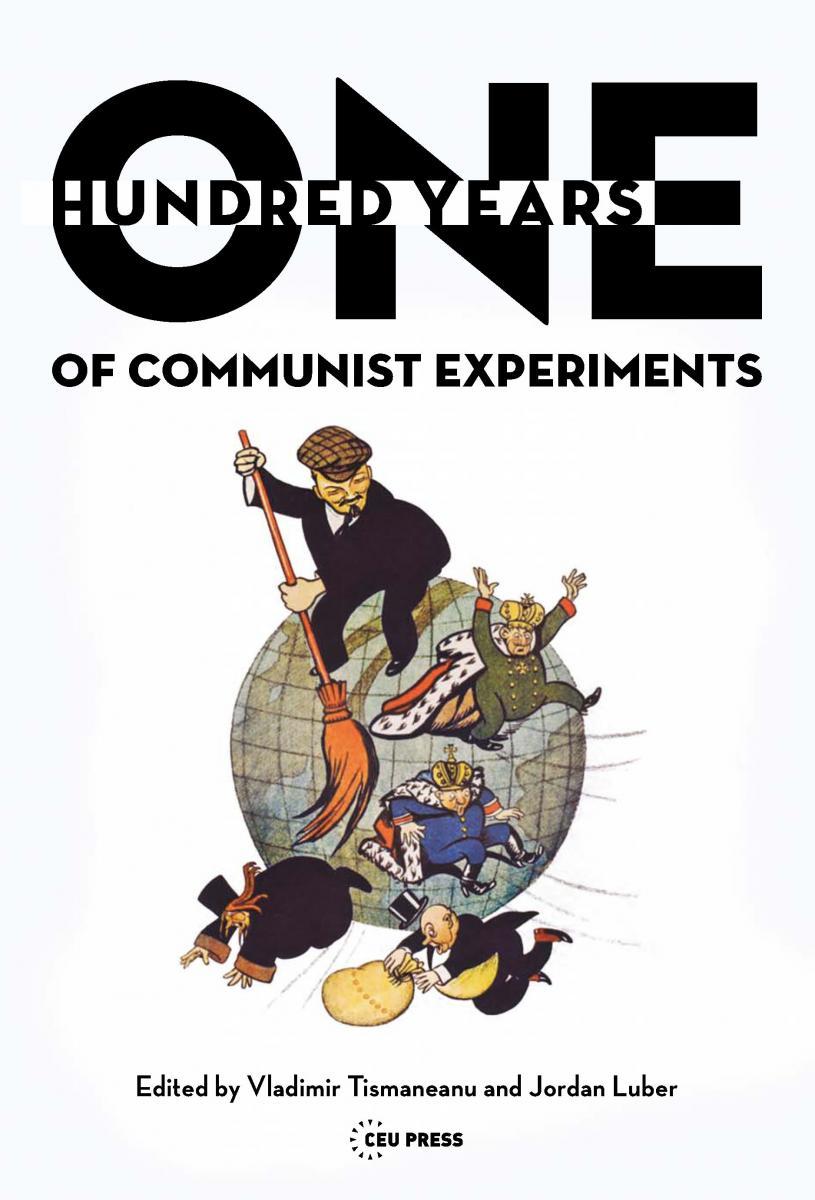 SOVIET THEMES ACROSS A VARIETY OF CEU PRESS PUBLICATIONS

This compilation features books of the Central European University Press, published since its establishment in 1993, that have some relevance to the Soviet Union. After the latest release, titles in the backlist are arranged by content: contemporary topics are on top, older themes below. For more substantial information about the content and availability, please click on the cover of the book, or on the links inserted into the citations.

“Soviet communism was popularly and intellectually endorsed first by enthusiastic fantasies, followed by naive pleading for reform, then cynical surrender and despair, and finally a moral stance on the necessity of a civic revolution.”—One Hundred Years of Communist Experiments.
“A perfect continuity from the first Stalinist generation to the contemporary distant, cold, pseudosophisticated cultural (ideological) clerk making use of Marxist rhetoric in order to cover his moral and intellectual vacuum.”
“The Nazis waged war on ‘Jewish Bolshevism’ yet it was the Soviet Union and its armed forces that played a major role in the defeat of Nazi Germany and the liberation of Eastern Europe from Nazi occupation and mass murder.”
“All the ‘deadweight’ of the planned economy was tolerated because it prevented the road from economic development to political reform that Europe had experienced. Welfare of citizens was irrelevant. Today, Putin’s kleptocracy and dictatorship are the newest, and hopefully final, stages of the communist economy.”

“During the invasion and the immediate postwar years very likely hundreds of thousands of women were raped. Yet, there was another side to Soviet soldiers. Many gave food to women and they were especially fond of children. In the words of a woman in Berlin: ‘They love to play Father Christmas.’”—Ireland's Helping Hand to Europe.
“Marshal Zhukov was rather magnanimous and favoured a constructive occupation of Germany. Thanks to his efforts, essential services and agriculture were restored in the Soviet-Occupied Zone. In the end, Zhukov’s main problem was that he had to face an inconsistent occupation policy conceived by the Kremlin.”
“The European Recovery Program, more commonly known as the Marshall Plan, went into effect on 3 April 1948. Whereas the Americans had invested $13 billion in Western European economies, it has been estimated that the Soviets removed at the very least $13 billion from Eastern Europe.”

Volumes from the backlist with a Soviet focus, contemporary topics on top, older themes below:

“To Stalin’s way of thinking, soldiers who had fallen prisoner, even in spite of their best efforts not to, were contemptible. This applied to Soviet prisoners too, toward whom the government and military commands showed no interest whatsoever.”—the story of Italian prisoners of war in the USSR.
“In the Soviet Union, hunger had been a constant since the 1930s. Taking ‘one meager meal a day’ in the Hotel Lux was a treat even for those who, in 1942 Moscow, worked for the Comintern.”
“On 4 September 1943, Sergei and two other met­ropolitans—Aleksy of Leningrad and Nikolai of Kiev—were received by Stalin, who authorized them to organize the appointment of the patriarch, whose seat had been vacant since 1926. Stalin further allowed churches and a certain number of seminaries to be reopened, and decreed alloca­tions for religious practice to be resumed.”

Other CEU Press titles with relevance to the Soviet Union:

Gorbachev: Dangers arise from the transitional situation in the USSR. We’re leaving behind one system of values. We see how the legitimate desire for national self-determination has negative implications: nationalism, separatism, sometimes with religious overtones. A balanced approach is needed; we have a unique responsibility.
Mitterrand: The USSR needs serious, sensible assistance. (July, 1991)
Gorbachev and Bush, now in paperback.
Yeltsin (to Bush): We got together today, Mr. President, the leaders of the three states—Byelorussia, Ukraine, and Russia. We gathered and after many lengthy discussions that lasted about two days agreed that the system in place and the Union Treaty everyone is pushing us to sign does not satisfy us. And that is why we got together and literally a few minutes ago signed a joint agreement. (December, 1991)

Thatcher said Gorbachev was an unusual Russian in that he was much less constrained, more charming, open to discussion and debate, and did not stick to prepared notes.
Reagan: We in the West have great strength—Europe alone has four times the GNP of the Soviet Union. We must deal with the Soviets from a position of strength. (December, 1984)
Conversations of Reagan and Gorbachev, now in paperback.
Gorbachev commented that compared to American expansionism the Soviet side’s was a small child. Reagan responded that there had been four wars in his lifetime, and the U.S. had not gained an inch of territory… He mentioned Berlin. He felt Gorbachev could and should tear down the Wall that day. (December, 1987)
Gorbachev said that the Soviets judged the problem of religion as not a serious one. There were not big problems with freedom of worship. He, himself, had been baptized, but was not now a believer and that reflected a certain evolution of Soviet society. (May, 1988).

“In January 1968, the Moscow dissidents Lariza Bogoraz and Pavel Litvinov pioneered what would become a central political practice of the dissident movement in the entire Soviet bloc—an appeal to world public opinion to intervene against a political trial. Later that year, Natalya Gorbanevskaya became the unofficial editor of the newly-founded Chronicle of Current Events, a template for human rights publications elsewhere in the Soviet bloc.”— evoked during the debate about the current state of East-West relations.
“The formation of the first human rights groups in the Soviet Union triggered the creation of additional committees including an Initiative to Defend the Rights of Disabled People, a trade union, and a Christian Committee to Defend the Rights of Believers.”
“Between 1945 and Gorbachev’s rise to power in 1985, only one woman became a voting member of the Soviet politburo.”

“While underground artists like the Moscow Conceptualists—such as Ilya Kabakov, Andrei Monastyrsky, and Dmitri Prigov—openly aim to subvert high culture, Petrovich in Makanin’s novel views canonical Russian literature of the nineteenth and twentieth centuries as his collective judge”—the aesthetic underground in the Soviet Bloc.
“The hero of the poem, named Venichka—Venedikt Erofeev’s namesake— rambles incessantly: about philosophy, literature, and European art; about ethno-psychology and Soviet daily life; about drinking, women, the Russian ‘spirit,’ and God. ‘I’ll remain below and from below I’ll spit on their social ladder. Right, spit on every rung of it””
“The period of Soviet decline and collapse of communism elevated Lviv's Bubabists, with their radically creative wit, catchy provocations, and sexualized metaphors, to a dual status, being both symbols of the democratic transition and pop stars.”

“During the first Soviet occupation, no one knew who was fated to be arrested or deported, and this had a terrifying and paralysing effect on people. Hitler spoke about his goals openly and everyone knew that he posed mortal danger to Jews, gypsies, homosexuals, and the mentally disabled, but Stalin was more inclined to shroud his horrors in silence or lies.”—from a memoir in conversations.
“When I arrived in Moscow in 1948, my uncle Sasha tore up my letters and many of the photographs that I had, explaining that, in the Soviet Union, keeping a diary is like reporting on oneself, like writing a denunciation—a донос, in Russian.”
“You know, my dear girl, replied the professor, in the Soviet Union psychology is not a science.”
“The third place that I cried in America was a dentist’s office. That is where I learned that it is possible to receive dental care without the terrible pain we all experienced going to Soviet clinics.”

“In the Soviet Union it took only a year—from 1929 to 1930—to not only eradicate urban unemployment, but to create a severe shortage of labor. The average Soviet worker changed jobs every eight months in 1930, and turnover rates were more than 100 percent per year in heavy industry.”—from a book on labor under communism.
“In postwar Eastern and Central Europe, the Stakhanovite movement took a less heroic form than in the Soviet Union. It lost its momentum at the end of the 1950s, together with other instruments for enhancing productivity coming through Soviet chan­nels.”
“The organization of production according to the Soviet-Tay­lorist model debilitated old solidarities.”
“In the GDR some overzealous functionaries even recommended cen­soring the Soviet media. In 1989 the party committee of the factory in­formed the district party leadership that on a Soviet cinema day the audience criticized the movies for displaying a negative image of the Soviet Union.”

“In late September 1939, two writers crossed a state border that had just ceased to exist. Their texts were translating this new territory into a ‘Soviet’ place, for justifying moving revolution across the border, and affirming the exclusive right for communism as the project of the future.”—two cities fundamentally transformed by World War Two.
“A team of architects determined that the city was set on the path of becoming “in the nearest future one of the most beautiful cities of not only Soviet Ukraine, but also the Soviet Union.”
“Those artists coming from pre-war Soviet Ukraine to Lviv considered the local actors ‘totally illiterate,’ and took it upon themselves to re-educate and ‘raise their artistic qualifications’.”
“While the Polish, Yiddish and Ukrainian academic theaters seem to have suffered from the imposition of the Soviet cultural structures, somehow the urban entertainment world seems to have oddly flourished. Soviet officialdom loved entertainment.”

“When war broke out in Europe, morale in Tokyo was low. On August 23, 1939, when Germany announced that it had concluded a so-called non-aggression pact with the USSR, the Japanese—to a man—felt that the anti-Comintern pact had been violated.”—as big powers interfered into Middle Europe.
“During the Red Army counteroffensive in front of Moscow, Stalin gave the British a detailed account of Soviet war aims.  After the war Romania was supposed to conclude a military alliance with the USSR and to grant Moscow its military and air bases. Hungary, on the other hand, was supposed to lose part of its territories to Romania and Czechoslovakia.”
“The Soviet military successes of 1943 were accompanied by the warming up of its relations with the Western Allies. The Kremlin took some demonstrable steps in this direction by dissolving the Comintern.”
“Particularly interesting is the Soviet use of the traditional great power strategy of achieving regional influence by exploiting hostility between smaller states.”

“In Moscow, Panait Istrati met Nikos Kazantzakis. Together they left for Odessa where, out of a strong revolutionary fervor, they embarked for Greece in order to spread the Bolshevik gospel.”—from the volume on intellectuals and the totalitarian temptation.
“By faithfully applying the 21 conditions of the Comintern, KKE followed policies promoting its Bolshevization. Particularly devastating was the imposition of a political line of social-fascism.”
“The German invasion constituted a first-rate political opportunity for the KKE. At that time, a small circle of leading Comintern figures in Moscow implemented the national front strategy.”
“The new conditions of the Civil War alienated all those new intellectuals who had been attracted by the nationalist discourse of the party during the occupation.”
“We should not overestimate the role of intellectuals in the configuration of the party’s identity. They mainly specialized in propaganda rather than in decision-making or in drawing up policy.”