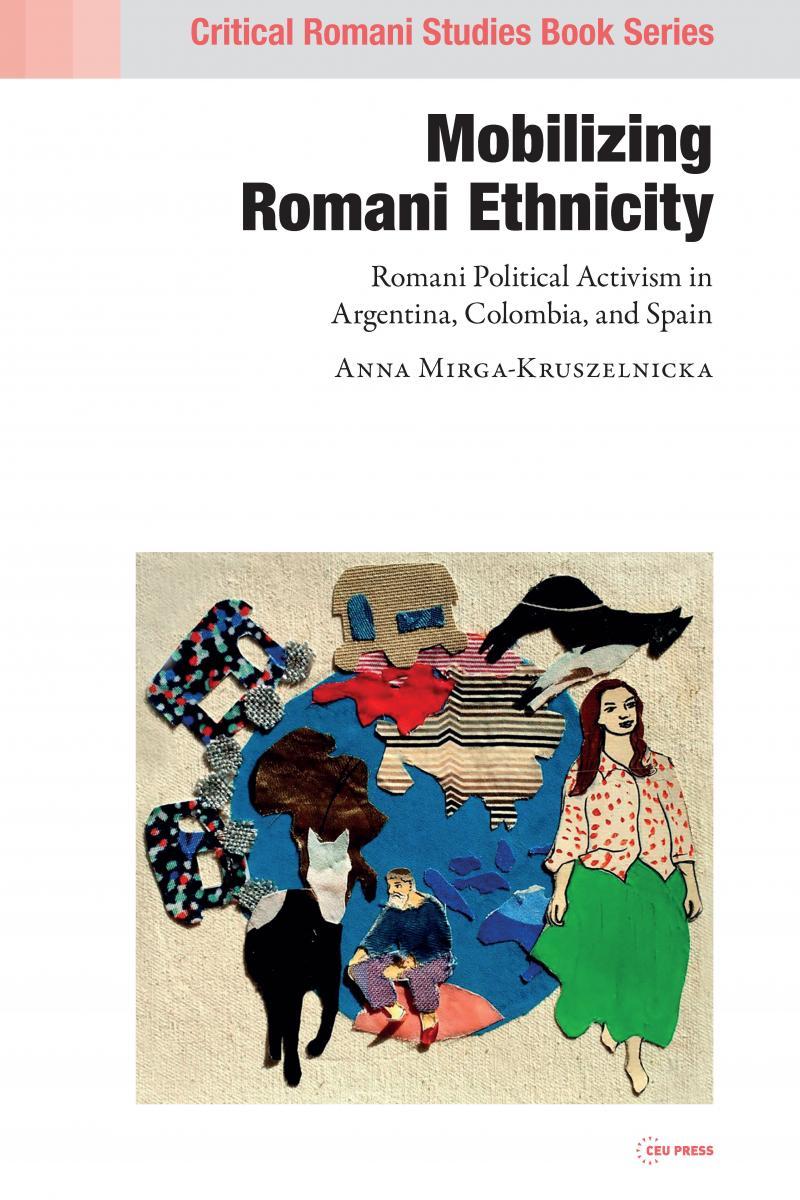 ISSUES OF ROMA ACROSS A VARIETY OF CEU PRESS PUBLICATIONS

This compilation features books of the Central European University Press, published since its establishment in 1993, that have some relevance to the history and culture of the Roma people. After the latest release, titles in the backlist are arranged by content: contemporary topics are on top, older themes below. For more substantial information about the content and availability, please click on the covers of the book, or on the links inserted into the citations.

„By providing original empirical data on Roma in Latin American countries and outlining parallel lineages of Romani ethnic mobilization comparatively in three countries and on two continents, the book arrives at broad conclusions regarding the nature of ethnic mobilization.”—from the Introduction of Mobilizing Roma Ethnicity.
„Ultimately, the success of Romani ethnic mobilization in meeting its collective demands is not only important to Romani people themselves but is in the interest of the non-Romani majority too. On the one hand, Roma are a young and demographically growing community which is a potential workforce for the many countries facing demographic decline and aging societies. On the other hand, Romani heritage as well as the notable values and qualities of many Romani societies (such as community strength and resilience, and conflict resolution through mediation and dialogue) are the still untapped riches that majority societies can embrace and seek inspiration from.”—from the Epilogue.

“The fundamental questions explored in this book are: What happened, when and why? What conditions favored or hindered Romani emancipation and liberation? It is beyond the scope of this book to cover all countries equally or to go in depth with organizational structures of Romani movements. Instead, I wish to highlight some crucial historical stages of success and some important protagonists. By including a more comprehensive study of the Swedish experiences, my aim is to connect the Swedish historiography with the international, thereby discussing reciprocal contexts and lessons to be learned.”—from the Introduction of Romani Liberation.
“Each chapter is supplemented with an excursus on more detailed topics like the 1956 abolition of the Norwegian immigration ban against ‘Gypsies,’ the Berlin memorial to the Romani Holocaust victims, the history of the anthem ‘Djelem Djelem,’ the abolition of Romani slavery and its aftermath in today’s Romania, a short biography of the Swedish Romani elder Rosa Taikon, and a bureaucratic attempt to forge a ‘collective Romani voice’ in Sweden.”

“Antigypsyism should be regarded as a societal problem with long historical and cultural roots, as a practice of “Othering” that generations have been socialized in and continue to perpetuate. Challenging it is imperative, while also recognizing that antigypsyism is tightly connected with ignorance and lack of interaction between the Roma and non-Roma.”—Constructing Identities over Time.
The first title in the Critical Romani Studies Book Series “Jekatyerina Dunajeva’s very important book provides an excellent and unique historical analysis of ethnic stereotypes developed and mobilized through formal and informal educational institutions.”
“This book weaves together impressive historical and empirical research of Romani communities in Hungary and Russia to teach us about nationhood, state power, and the negotiation of belonging.”
“Combining political theory with fine-grained ethnographic fieldwork, Dunajeva takes us inside school classrooms, playgrounds and lunchrooms, and into NGOs and community life.”

Books with a focus on the Roma:

“Antigypsyism is about power. What makes antigypsyism special as a form of racism is the impunity enjoyed by the perpetrators. Those promoting hate speech or engaging in any racist action targeting Roma might do so because anti-Roma racism is widely accepted, and they feel encouraged in their actions by the lack of sanctions against them.”—from a critique of Roma policies in Europe.
“Due to time pressure, EU institutions rushed the adoption of a policy document on Roma and in doing so disregarded Roma participation as an objective and ignored the previous experiences of Roma policy-making efforts that would have advised otherwise.”
“The policies directed towards Roma in Europe fail because policy-makers ignore important aspects related to Roma ethnic identity, including antigypsyism. Typically, Roma-related issues are addressed in the context of poverty and social inclusion rather than the more complex context of equality and social justice.”

The way in which researchers, experts and scientists classify people can have serious consequences. In conjunction with mass media production topics such as poverty, lack of education, unemployment and welfare dependency were transformed into an iconic depiction of Roma. A critical reading of Roma-related literature shows that the scientific and expert findings circulated by Roma-related research are highly influenced by the political regimes in power. A consistently negative image of Roma persists. Many of those labeled as Roma internalize these enduring stereotypes, which limits their expectations, and often negatively influences their life course.

Ten Years After presents and discusses the history of Roma school segregation in Central and Eastern Europe, including field interviews.

Living beyond the Pale discusses the relationship between the housing conditions of the Roma and the issues of safeguarding the environment.

The Roma—A Minority in Europe contains materials of a multidisciplinary conference held in Tel Aviv on the past and present of the Roma.

The Roma in Romanian History is the most comprehensive treatment of the subject. It discusses slavery, 19th century emancipation, the processes of integration, assimilation, and marginalization.

Though Poland has not traditionally had a large Roma population, this book presents an eventful history of a people living on the margins. The historic documents illustrate a marked contrast to present stereotypes and popular media images and shows how the position of Roma/Gypsies shifted gradually from respected, wealthy and partly settled citizens of the early modern times, towards criminalized vagrants of the 18th century. The 166 original and previously unpublished documents date from 1401 up to 1765, and tell the story of not only the Roma in Poland, but also of those who now live in Belarus, Lithuania, Latvia and Ukraine.

“Women and children are subjected to sex trafficking within Bulgaria particularly in resort areas and border towns. Ethnic Roma women, children, and men are more vulnerable to being trafficked.”—from a book on film and media representations of human trafficking in the Balkans;
“The opening scene of the the Bulgarian-French production Face Down shows live bar musicians singing what is known in Bulgaria as ‘chalga’ genre—primitive and sexist lyrics accompanied by music influenced by Romani and folklore rhythms—the whole presentation of Bulgarian reality becomes subordinated to kitsch culture, criminals, and families willing to sell their daughters.”
“The ending of the film certainly offers no hope for Bulgarian Roma, but also indicates that their conditions of social and economic marginalization and depression provide no exit.”

“The Velvet Revolution was a moment of unity. Czech Roma, the targets of virulent racism before and after also participated. One of them, who emigrated less than ten years later, added in retrospect: he did not know then that it would also be the last time.”—from The Legacy of Division
“The documentary The Romanians Are Coming is narrated in broken English by Alex, one of the Roma protagonists. Alex was chosen not least because, in his voice, the narrative often seems to challenge fearmongering politicians like Farage.”
“The Romanian Roma protagonists featured in the show live next to the dumping ground in the slums of Baia Mare, riding horses and surviving on scrapping metal. Their presence on the screen is meant to indicate the extent to which anti-Roma discrimination is institutionalized in Romania.”

An essay in the collected volume discusses the case of Roma and Gypsy-Travellers in Wales. “Interviewed about the possibility of moving to apartments, some of them have expressed the fear that this change could lead to a breaking down of patriarchal family unity with the all network of solidarity and mutual assistance that this involves. Other fears are also present: the fear of entering into close contact with a perceived hostile external world, the fear of losing the all open-air physical space in which they celebrate religious rites and social events and undertake traditional crafts such as metallurgy and the keeping of their animals.”

“The first months after the Nato war were marked by anarchy, looting, and large scale violence against Serbs and other minorities (especially Roma and Gorani). While the UCK leadership probably did not order the violence, it failed to limit it.” – affirms the book on the transition towards a stable democracy in Kosovo. Currently twelve deputies represent local Turks, Bosniaks, Gorani, Roma, Ashkali, and Egyptians in the Kosovar Assembly. Ethnic minority parties such as the Ashkali Party for Integration are able to influence the composition of the governing coalitions and also some important political decisions concerning both all Kosovars and their respective communities.

“After the regime change the so-called ‘Gypsy lines’ ceased within the police forces, although they continued to use ‘Gypsy background’ as a unique marker in investigations.”—from The Rise of Populist Nationalism
“As an effect of the attacks, the Roma felt threatened. During this period Roma ‘patrol groups’ were established in several settlements.”
“The discourse about the Roma includes a temporal distinction, which associates ‘decent Gypsies’ with the past, and ‘not decent Gypsies’ with the present.”
“Through sport the Roma youth can attach a positive experience to their identity. To the question who they support at the Olympics, the unanimous reply was the Brazilians.”
“The African-American analogies work in several social scenarios in relation to the Roma. Through this analogy the Roma youth are simultaneously making the Roma identity livable for themselves, but also searching for ways to escape from being Roma.”

“The first party resolution on the situation of Roma in Hungary in 1961 declared the Gypsy population not an ethnic group, but a ‘backward social layer’ to be assimilated into working-class Hungarian society.”
From a chapter in the volume on the development of national public health systems.
“Public debate around the issue of birth rates and fertility in the early 1980s contained clearly eugenic undertones, including the accusation that well-situated women were ‘on a birth strike’ as well as occasional racist arguments regarding the Gypsy population.”
“While raising attention to the alarming trends in decreasing birth rates among the majority population, the Ministry of Health requested doctors to propagate abortion free of charge as a means of fertility control among Romani women.”
A 1963 ministry directive “criticized the fact that Gypsy women were often excluded from the gift-set of baby clothes provided to mothers of newborns in Hungary since the early 1950s.”

The book examines the effects of the policies of the Hungarian state towards minorities in the second half of the twentieth century. In the first phase (1945-61), the authors show the efforts of forced assimilation by the communist state. The second phase (1961-89) began with the resolution denying nationality status to the Roma. Gypsy culture was regarded as a culture of poverty that must be eliminated. The third phase (1989-2010) brought about some freedoms and rights for the Roma, with large sums spent on various Roma-related programs. Despite these efforts, segregation and marginalization continues, and is rampant.

“The socialist authorities distanced themselves from the racial definition of the Roma as well as the violent administrative control measures of the interwar period. Instead, they found employment opportunities the most important in ‘solving the Gypsy question,’ and emphasized the importance of providing better housing and improving education through school attendance and daycare.”—from Protected Children, Regulated Mothers
“While caseworkers pressured on lone mothers to get married, Romani women who married ‘in the Gypsy way’ were likely to face child protection authorities’ negative evaluation concerning their lifestyle and sexual morality.”
“The placement of Romani children into state care increased following the introduction of the first party resolution on the ‘Gypsy population’ in 1961.’”