"Helen M. Faller devotes much time to the fascinating twists and turns of Tatar orthography, and more time dissecting the interplay between Tatar speakers and Russian speakers in Kazan. Faller draws a useful distinction between nation-builders and ethnicity-based nationalists. Where the standard model of nationalism theory stresses belief in a unified, geographically limited community bound together by a common language, Faller writes that she didn’t find this among the Tatars she got to know during many visits to the country. (Most of her sources were women; if there are heroes in her book, they are the resourceful Tatar-speaking women.) There are no 'average' Tatar-speakers, and the boundaries between 'Tatar culture' and 'other cultures' are 'permeable and shifting'. And no wonder, any culture whose language underwent the manipulations suffered by Tatar over the past century would almost have to learn to shift with the tides of history. Faller’s vision of Tatarstan, and Russia, is bleak. 'Tatarstan sovereignty no longer exists as a political movement. The majority of Tatar-speakers have lost hope in the possibility of changing their society into one more equitable than that which existed during the Soviet period,' she writes in conclusion. Anxiety and despair are pulling Tatars in two directions – toward religiosity and, for younger people, toward digitally-based cultural and language activism. 'What these two trends mean for Russia’s future development as a multi-national state is unclear, though it is unlikely that a peaceful transition towards inclusive pluralism will occur in the foreseeable future'.”
Reviewed book: 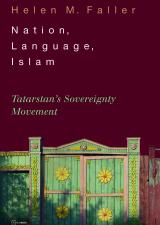