"This volume is a refreshing break from the standing body of literature in several respects. First, it is disciplined by Henry Hale’s 'patronal' theory, which in some ways—while mainly within political science—breaks the politics-economics divide. Second, the 'patronal' concept creates space for cross-national comparison: to what extent the system 'patronal' present is different in various post-communist systems (acknowledging that some degree of 'patronal' system is present in all actually existing—even in liberal democratic capitalist—societies). This is a non-trivial achievement. All in all, this is a wonderful collection of essays, a fertile marriage between Hale and Magyar with many splendid applications of their theories to many interesting countries and far-reaching implications for countries beyond the former USSR and East European post-communist world, and not only for China, but also for the Middle East, Africa, Latin America, and the emergent trend to limit the separation of branches of power even in countries we normally label as liberal democracies (like Trump’s vision of the United States)."
Reviewed book: 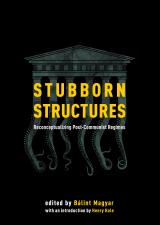