Studies in Ethnicity and Nationalism

"Nelly Bekus’ book is a unique contribution, as it deals with the seldom-covered topic of Belarusian national identity.After twenty years of independence, Belarus remains a special case among European nations as the only non-democratic regime on the continent. Until recently, the Belarusian identity issue was primarily covered in the West by scholars of non-Belarusian origin, such as David R. Marples and Grigory Ioffe. This trend has only begun to change within the last ten years, as articles by Belarus-born social scientists such as Natalia Leshchenko and Alexander Pershaihave started to appear in Western journals. Bekus’ book, however, is the ﬁrstmonograph devoted to Belarusian identity written by a Belarusian scholar and published in English in the West. It thus presents a comprehensive ‘insider’s view’ of Belarusian identity. The basic idea of the book is to show and explain the origins of two Belarusian national identities that (co)exist and compete in Belarusian society, namely ofﬁcial and alternative Belarusianness. The main contradictions betweenthese identities are their different perceptions and evaluations of the historical preconditions for the development of the Belarusian nation. According to Bekus, the ofﬁcial version gloriﬁes the Soviet period and regards it as the ﬁrst form of adistinct Belarusian nation. The alternative version gloriﬁes the short-lived Belarusian People’s Republic (1918), while the Soviet period is seen as destructive of Belarusian identity rather than formative."
Reviewed book: 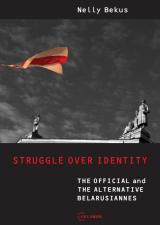