"The overall thesis of the book is straightforward: unless Serbia moves from the uncivic values which still dominate public space and discourse, toward civic values, the prospects for democratic consolidation and liberal democracy in Serbia remains dim. The system of uncivic values, which flourished under the ancien régime (under Milošević), nationalism, irredintism, chauvinism, is still well and alive after 12 years of transition in Serbia. All things considered, this is well written and well researearched volume which can be read by wider audience, becond just academic community"
Reviewed book: 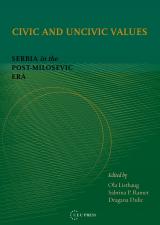