"Commentators on the travel genre must likewise be selective in view of the fast growing bulk of diverse critical work on it. The book under review testifies to the widening scope of research of this kind. It focuses on East European travel writing and, as its editors point out in their Foreword, is the first work of criticism to analyse it ‘in a systematic fashion’, thus filling gaps in both the study of travel writing and in research ‘into the development of personal and collective identities’ in the ‘old’ continent’s eastern parts. One of the purposes behind Under Eastern Eyes is to introduce much needed clarity into the analysis of European cultural mapping, an area of interdisciplinary inquiry that has been developing with exceptional vigour since the collapse of Communism in Eastern Europe and the disintegration of the former Yugoslavia. Under Eastern Eyes brings together different strands of inquiry, ranging from genre criticism and narratology, through postcolonial theory and its critique, to imagology, anthropology and sociology, and this, together with the fresh insights it introduces into the academic study of travel writing, is among its indisputable merits."
Reviewed book: 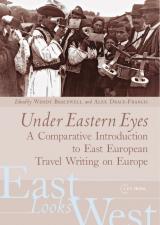