"The author focuses on the judicial issues concerning land holdings and transference during the period of the revived Bulgarian state, especially in the ephemeral region of Eastern Rumelia, which is now the southern area of Bulgaria. As a part of the issues of land ownership transference, the author also examines the wider consequences of the emigration of the Turkish and other Muslim minorities of Bulgaria to Turkey. This is an excellent study for those who wish to understand the legal processes by which the Bulgarian nationalist order replaced the imperial Ottoman establishment in the agricultural economy. Overall Mirkova demonstrates the determination of the revived Bulgarian state to maintain its authority over a system of land ownership based upon law and to use this authority to develop or modernize the agricultural segment of the economy, even if this law was not always exercised fairly to Bulgaria’s Muslim minorities."
Reviewed book: 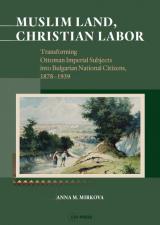