"This book is a massive (662 pages) series of twenty-five studies by well-known, liberal Hungarian scholars about the short-comings of the Viktor Orbán-led Hungarian government. It is an abbreviated version of a previously published three-volume work by Bálint Magyar, co-editor of this volume with Julia Vásárhelyi. When searching for an apt description of the current Orbán regime, Mr. Bálint characterized it as a 'Post-communist Mafia State'. Rejecting other frameworks to describe the existing Orbán regime, such as dictatorial, authoritarian, or illiberal democracy, consecutive included essays have accepted the Mafia State paradigm. Unlike the traditional (Sicilian) mafia which spreads its tentacles underground, in the case of Hungary it has been operating in the open. The ensuing studies zeroed in on how the Orbán government had subverted the previously existing checks and balances of the multi-party democratic system. The aims of these scholarly studies are clear; they are criticizing the mafia-like encroachment of the Orbán regime. However, they do not provide any alternatives or strategies on how to counter the Mafia State."
Reviewed book: 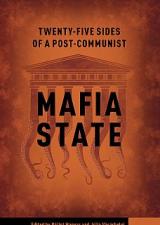