"The editors of this wide-ranging volume question—up to a certain point—the binary approach traditionally adopted by most historians of Europe who write about the categories “nation” and “empire.” Stefan Berger and Alexei Miller seek to loosen or perhaps even undo the traditionally dichotomous treatment these categories have received as “two profoundly different types of political organization of society and space”. Their strategy in this collection is to draw historians’ attention to processes of ethnic nation building that took place in imperial cores. The volume reads as the product of several workshops and conferences where, over time, the scholars involved engaged actively with each other’s approaches. It includes sizable essays devoted to Britain, Denmark, France, Germany, the Habsburg Monarchy, Italy, the Ottoman Empire, Russia, and Spain, as well as five shorter essays that usefully comment on general questions of comparison."
Reviewed book: 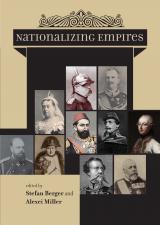