"The work’s strength is in comparing two cases that are not oft en paired. In contrasting them, the author makes us see aspects that are not oft en delineated either in single-case studies or broader comparisons. Thus, new channels of dissidence appear: pilgrims to a reader of East German literature, or the working groups to a reader of Slovak literature. The comparison drawn between the discourses of church activists also enhances some features, such as the persecution and dissidence experienced in socialist Slovakia while East German churches seemed more inclined to compromise with the state. This is particularly interesting since East German churches have, in the wake of their unification with West German churches, insisted on their distance from the state."
Reviewed book: 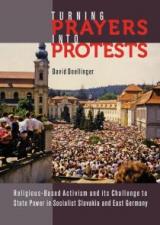