"This book, by Margarita Balmaceda, uncovers the main reason for the country’s ability to avoid economic and political upheavals. The secret is in the Lukashenka administration’s ability to harness Belarus’s position as a transit country for Russia’s oil and gas exports to the European markets. Using Russia’s subsidies—some direct, others virtually undetectable—in energy supplies, the Lukashenka administration has managed to avoid economic reforms while keeping the economy going and to suppress political dissent without causing popular discontent. Living the High Life in Minsk analyzes in a superbly detailed fashion the cooperation between Moscow and Minsk in establishing a safety net for the Belarusian regime. The book reveals the author’s deep knowledge of Belarus—not only its formal political system or economic performance but also the cultural peculiarities of this enigmatic and contradictory post-Soviet country. This informative, detailed, and pioneering work will be of interest to all who study the country"
Reviewed book: 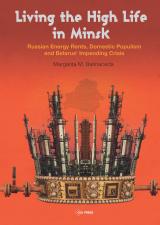