"The Roma in eastern and central Europe have faced a plethora of economic, social, and political challenges since the collapse of communism in 1989. Across an expanded European Union, many Roma encounter increasing unemployment, segregation, and discrimination. While several notable authors have addressed the marginalization and impoverishment of the Roma, few have delved into the environmental injustices aff ecting them. In this book, Richard Filčák expertly adds another layer to the discussion of the Roma’s worsening welfare by examining the environmental hazards threatening Romani communities in eastern Slovakia. In detailing an inequitable eastern Slovakia, Filčák lays out two possible pathways. The fi rst allows for an amelioration of the current plight of many Roma, through poverty relief and environmental management programs. The second envisions a deepened exclusion of Roma, leading to increased confl ict over resources and a worsening distribution of environmental harm. Slovakia can avoid the latter if the political will for change, heretofore scarce, is exerted. The book’s recommendation section is noteworthy, and hopefully it reaches beyond academia to Slovak and EU policymakers"
Reviewed book: 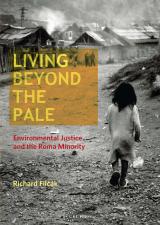