"As Lupovitch shows in a carefully researched local case study, there is value in turning from the large centers of Jewish life in central and eastern Europe to examine smaller Jewish communities. In reality, the Miskolc Jewish community was far from negligible. In 1848, this was the third largest Jewish community in Hungary after Budapest and Nagyvárad, and by 1869 Jews made up more than 20 percent of the city's population. Seizing upon the survival of a rich collection of communal protocols, Lupovitch offers a detailed reconstruction of the development of Jewish institutions in the city, the relationship between Jews and their non-Jewish noble patrons, and debates within the Jewish community during the course of the eighteenth and nineteenth centuries."
Reviewed book: 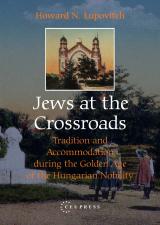