"Comparative studies of Balkan history are still rare despite the analytical benefi ts of comparing phenomena in societies that shared a lot of structural features but also differed in important respects. Augusta Dimou’s book on the emergence of socialism in the late nineteenth- and early twentieth-century Balkans is therefore a welcome addition to the comparative study of the Balkans. Dimou lays out her main research interest on the opening page: “How was the international socialist project ‘translated’ . . . in the context of Southeastern Europe?” Dimou succeeds in making her point, not least by her comparative perspective. At the end she stresses the contribution that socialism, before communists eventually came to power, could have made in the Balkans—not only as a modernizing but also as an internationalist idea that injected new visions of justice into political life. The monograph is of importance for specialists in Balkan history and those with an interest in the history of socialism. It can certainly be used by graduate students."
Reviewed book: 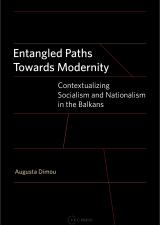