"Despite extensive female involvement in numerous war-related activities, the notion that war is a male endeavor with no place for women has long held ideological sway in many societies. Recently, a number of studies have critically analyzed the presumed masculinity of war. This collection represents a valuable contribution in this vein, demonstrating how eastern European cultural productions both upheld this masculine interpretation of war and countered it with gendered realities. The essays included were written primarily by scholars of Slavic and Balkan literature and culture and speak to an audience of educated readers familiar with the subjects engaged. The book also includes some beautiful and colorful images of many of the cultural representations discussed. Overall this book presents an important contribution to the field of women and war studies by offering a number of interesting new insights into how cultural productions preserved the notion of the masculinity of war as well as how they worked against it"
Reviewed book: 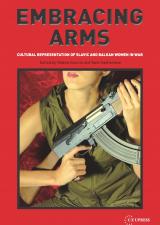