"The Fundamental Law of Hungary that came into effect on 1 January 2012, and the political and legal contexts that led to its promulgation, has been generating headlines that fit in with a general perception of the disappointing state of constitutionalism and democracy in eastern and central Europe. This edited collection contributes to such critical debates, and it should be placed in the wider context of the trials and tribulations of the post-1989 wave of constitutional and democratic reforms in the region. The two main aims of this book are stated in the introduction: to provide a 'comprehensive account of the Fundamental Law’s main attributes and its underlying principles', and to “examine a constitutional transition [in Hungary] from the perspective of comparative constitutionalism, legal theory and political philosophy'. There is a strong unifying theme clearly present in most of the contributions, and that is the exposition of the illegitimate nature of the Fundamental Law promulgated by the Fidesz Party, along with the danger that the current constitutional arrangements pose to the future of Hungary’s democratic and constitutional development. Most chapters off er analyses of the processes leading to Fidesz’s capture of the state, both politically and constitutionally, as if to send a general warning against allowing constitutional rules like the one that failed to prevent this process in Hungary."
Reviewed book: 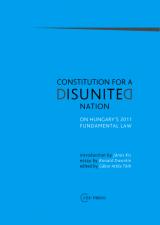