"One would not expect a scrupulously researched academic tome to read like a spy novel, but Cold War Broadcasting manages in places to do just that. Based to a very large extent on files from Soviet-era intelligence and security establishments, this book examines the impact of government-sponsored Western broadcasting on societies behind the Iron Curtain and the efforts made to counter that impact. The most fascinating study in the book, by István Rév of Budapest, is an introspecitve and philosophical tract. Rév alludes to the fact that both Washington and Moscow intently studied one another's messages and modified thier own messages accordingly - a subtle example of international meta-broadcasting. As pointed out in this intriguing study and attested to in the words of the political elites most adversely impacted by Western radio, funding for these efforts constituted the best imaginable bargain in combating Communism, given the pervasive effect such broadcasts had on the course of history. Even CIA analysts relied on information that could be provided only by the radio stations"
Reviewed book: 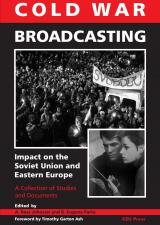