"The translation by Urwin Lewitová preserves the atmosphere and tone of the original and has lost none of its power since it was first published in 1964. The introduction by Czech poet and essayist Miroslav Holub, written shortly before his untimely death in 1998 is an informative and insightful introduction to Olbracht, his post-communist literary reputation, and the Ruthenian Jews."
Reviewed book: 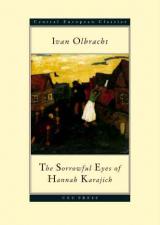