"This book is important for scholars interested in the aftermath of the Holocaust in the Soviet Union. The author justly distinguishes between Sovietized Jews who had lived in the republic’s pre-1939 borders and “westerners”—former Polish citizens, who constituted a small portion of the total Jewish population of the republic, but played a disproportionally significant role in Jewish life. The author, originally from Minsk himself, thoughtfully used his intimate knowledge of the topography, history, and social fabric of Soviet Belarus. He accessed and quoted for the first time numerous documents from the Belarus state, party, and KGB archives of Minsk as well as of Gomel, Mogilev, and Brest, and this makes the monograph particularly valuable. A number of important documents related to religious life are published in the appendices. The book is a big step forward in the study of Belarus and Soviet Jewry."
Reviewed book: 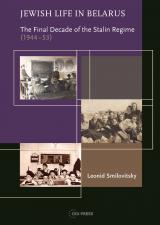