"This book is the first sustained and systematic study of pogroms in Tsarist Lithuania. Geographically, the book focuses on Lithuania understood in the 'ethnic' sense, that is, as the territory roughly coextensive with the modern state of Lithuania (rather than the early modern Grand Duchy of Lithuania). Temporally, it covers the long nineteenth century, though the focus is primarily on the period between the 1880s and the First World War - the time when most pogroms in Lithuania took place. Staliūnas has done an admirable job bringing to light a previously unexamined and important historical problem. His use of sources (Yiddish, Hebrew, Lithuanian, Polish, Russian, and Belarusian), attention to detail, and judicious analysis are most impressive."
Reviewed book: 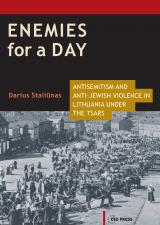