"This thought-provoking and comprehensive volume comes at a propitious time. Thirty years following the Soviet Union’s collapse, it asks fundamental questions about the nature of the post-communist transition, the quality of governance in the post-Soviet world (and beyond), and the sources of regime variation. With the benefit of hindsight, Bálint Magyar and Bálint Madlovics reflect on an extensive literature in a context of some abject democratic failure and increasingly consolidated corrupt networks in select countries, alongside more positive evelopments, including, variously, sustained economic growth (including in China—a perhaps surprising case for inclusion in the study) and/or increased freedoms in particular regions. For such an extensive investigation, the authors do an admirable job of sustaining the argument. Like all great studies, this one tries to answer some key questions while also provoking pressing new ones."
Reviewed book: 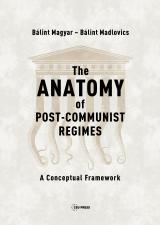