"Dysa persuasively argues that witchcraft prosecution was comparatively mild in the Ruthenian lands. In fact, magistrates were reluctant to prosecute witchcraft. When they discovered instances of witchcraft, they preferred lenient sentences of fines and flogging, warning individuals of heavier sentences should they become recidivists. A mere seven of the trials involved torture. Executions were even rarer. So ubiquitous was the practice of magic, Dysa concludes that in these reputation cases, some of the accused might actually have indulged in it without losing their relatives’ and neighbors’ trust."
Reviewed book: 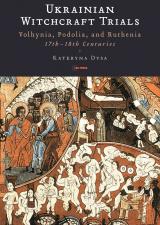