"Mickunaite shows how Vytautas's image took various forms in the early modern era: in the fifteenth century as a legislator (rather a stretch, considering that legal tradition was an embryo during his reign); in the sixteenth century as a warrior and Christianizer of his land; in Western Europe as a bloodthirsty semipagan tyrant; in Russia as a warrior king. Particularly interesting, and deserving of further study by folklorists, are the popular legends of Vytatutas, such as the founding of the village Sorok Tatary near Vilnius."
Reviewed book: 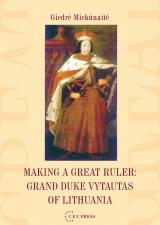