"Making extensive use of local archives and periodicals, Chakars insightfully examines the evolution of Soviet nationality policy in Buryatia. She argues that, far from being merely the passive victims of Communist oppression and Russification, the Buryats energetically utilized the Soviet modernization project to gain strikingly high levels of educational and professional success. However, this success came at the cost of significant assimilation (particularly language loss), leaving many in the post-Soviet generation asking just what it means to be Buryat."
Reviewed book: 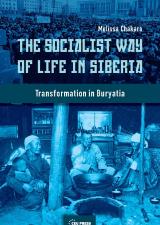