"The fundamental virtue of Nekrašas’s work is his clear realization that positivism is far more influential than all disavowals would make it seem. Indeed, as Nekrašas rightly argues, positivism silently continues to color research programs and theories across the social sciences and humanities. What Nekrašas dubs the 'positive mind' (or the philosophical attitude of positivism) is still far more relevant and influential than many would like to admit. Nekrašas is at his best lucidly reconstructing numerous philosophies within the larger stream of the positivist tradition and drawing interesting distinctions between the many varieties of positivism (including socially progressive nineteenthcentury forms versus more logically technical forms in the twentieth). He also is admirably aware of the fact that positivism has always been a deeply political movement, with strong ambitions to either radically change or substantively reform major features of human social and ethical life by enthroning the sciences as authoritative."
Reviewed book: 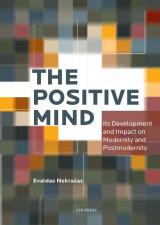