"All chapters included in the monograph, despite a fairly wide range of subjects, make one unique complete narrative. They discuss important topics, ranging from the issue of the political and electoral system functioning, the role of minorities and religion in the lives of the Poles, and ending with art and television. The basis of the book is common ground concerning the way in which Polish society perceives key values that, on the one hand, identify society and, on the other, cause its polarisation. The reviewed book is an attempt to answer questions about the specifics and legitimacy of the existence of key values declared by Polish society, often referred to as liberal. This question, according to the authors, is particularly relevant after the victory in the parliamentary elections in 2015 of Law and Justice, whose manner of governance raises numerous concerns related to violation of the rule of law. To sum up, it should be acknowledged that this monograph, by presenting a comprehensive case study, addresses an important research problem, which is the analysis of the perception change of the values of the period of political and economic transformation important for Polish society. At the same time, referring to the Polish case, the authors try to highlight the emergence of an increasingly frequent mechanism of moving societies of some European countries away from liberal democracy in favor of authoritarian tendencies (Hungary is another frequently cited example)."
Reviewed book: 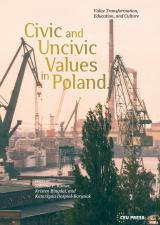