"This volume, as the entire series, is a challenging collection of essential primary sources, accompanied by introductory essays and contextual analyses in the best senses of the term: their high level of scholarship demands the intelligent engagement of the reader throughout; it invites the educated elites of Eastern Europe to throw away the crutch of myth and half-truth when promoting or interrogating their unique national identity; it demands that scholars working in the Western humanities rethink widely-held assumptions about ‘Eastern Europe, what constitutes conservatism and progressiveness, and the idea of a ‘normal’ path to a liberal modernity. The introduction proposes a concept of ‘anti-modernism’ to categorize phenomena in Eastern Europe that may be difficult to grasp for those whose path to liberal democracy has not been blocked by decades of totalitarianism, since they evoke an atavistic rootedness (conservativism) but in a paradoxically futural spirit (modernism). As a result, the reader of whatever cultural background emerges with a more lucid feel for what it means to be Eastern European, modern, and human after the End of History."
Reviewed book: 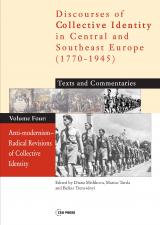