"The Hungarian revolution began with mass demonstrations in Budapest in October that shocked the Russians and encouraged American officials hoping for a crack in the Soviet empire...Today, Hungary is in NATO and the Soviet Union is no more. But the experience faced by American officials, as they tried to balance two crises and watched events spin out of their control, is illuminated in "The 1956 Hungarian Revolution: A History in Documents," a new book of archival material published by the Central European University Press in cooperation with the National Security Archive in Washington."
Reviewed book: 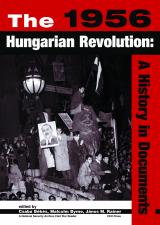