"The real value of With Their Backs to the Mountains is that it is a history of Carpatho-Rusyns that is not written from any state perspective, whether that of Budapest, Moscow, Kyiv, Prague, Warsaw, or Bratislava. It is not inappropriate to say that Magocsi’s history is written from the perspective of Carpatho-Rusyns, while at the time emphasizing that the book systematically analyzes historical events in an objective manner, a not unimportant characteristic of his research. Although a scholarly publication, the book has relevance in the context of present-day changes in Europe. The relevance factor applies to those states to whom the doors became open for membership in the European Union. Although not the sole reason (but nevertheless a reason) was the fact that all of those states recognized their Carpatho-Rusyn citizens to comprise a distinct ethnos. The book’s relevance factor also applies to other countries, first and foremost Ukraine, which is seeking a path to the European Union and which inevitably will be required to recognize that the 1945 annexation of historic Subcarpathian Rus’ and the abolition of the Carpatho-Rusyn nationality throughout central Europe were simply part of the expansionist ideology of the Soviet Union. Magocsi’s monograph, which outlines the above historical scenario, may therefore become a kind of road map for Ukraine’s future political elite."
Reviewed book: 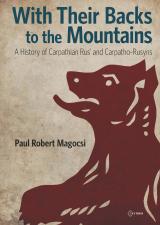