"The collective volume aims to analyse the events of 1989 in a broader perspective. On the one hand, it interrogates the impact of the 1989 revolutions of Central and Eastern Europe in the world at that particular moment, and, on the other, it argues that the revolution which started in 1989 goes on while inspiring mass mobilisation in other areas and in recent years, as was the case with the ‘Arab spring’, or the ‘Occupy Wall Street’ movement in the USA, to name but a few. Inspired by the idea of Joseph de Maistre, who wrote about the French Revolution of 1789 that 'for a long time we did not fully understand the revolution of which we were witnesses; for a long time, we took it to be an event. We were mistaken; it was an epoch', the editors and the authors look at how the events of 1989 and their aftermath 'resonated years later and thousands of miles away'. The nine chapters deal with various topics such as Poland and the apartheid in South Africa, Soviet Central Asia, Tiananmen, the American Culture Wars, the Iraq war and the Middle East, the uprisings of 2011 in Northern Africa and the Occupy movement, the Euromaidan, etc." Claudia-Florentina Dobre, MemoScapes: Romanian Journal of Memory and Identity Studies, 3/2019
Review date:
2019
Link to review:
https://www.ceeol.com/search/article-detail
Reviewed book: 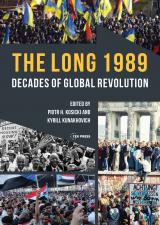