"Balinska's biography is peopled with a veritable pantheon of the first generation of international civil servants - from the Secretary-General of the League, Sir Eric Drummond, to Nansen, Monnet, and, as regards Britain, such notable internationalists as Philip Noel Baker, Lord Cecil, and Arthur Salter - who all worked closely with Rajchman and praised him highly. Monnet ascribed to him a rare 'sense of the universal', and the Irish nutritionist W.R. Aykroyd (a close colleague of Rajchman) observed that almost always he 'had the good of humanity at heart'. Balinska's study profusely demonstrates the truth of these lofty estimations, as well as of her subject's own profound conviction that co-operation can transcend personal, political, and national ambitions."
Reviewed book: 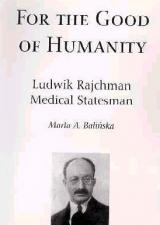