"The editors tell us that in Central and Eastern Europe, eugenics and national racism were the cornerstones used in building the nation and the state. Far from giving in to the siren call of the forces of reaction, this 'parti de la nature', as Claude Lévi-Strauss calls it, brought together two modern and highly toxic substances: eugenics and ultra nationalism."
Reviewed book: 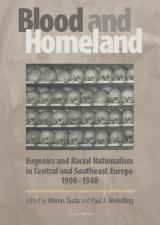