This is the first thoroughly conceived analysis of practices, actors and institutions of historical politics in Eastern and Central Europe. Based on long term research and seen against the background of the evolution of politics of history in some other major countries of the world in the second half of the twentieth century, this remarkable collection of articles is to be highly recommended to all those who are painfully aware of the particular complexity of the link between history, politics and ‘collective memory’ in post-Soviet Eastern and Central Europe.
Reviewed book: 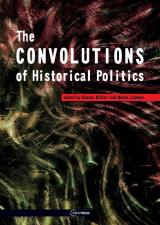