"Ilidko Barna and Andrea Peto have produced a study of the postwar trials in Hungary of those guilty of crimes under the former, German-allied regime. These trials have not received much attention from scholars outside of Hungary, so this addition to the literature on transitional justice is to be welcomed. The trials were explicitly political; the members of the “people’s tribunals” were drawn from the five principal political parties that constituted the ruling Hungarian National Independence Front, and as the authors point out, this settling of accounts with the former fascists and their fellow travellers was distinct from the trials of opponents of the new Communist regime that came later. They were surprisingly badly organized and ineffective, with large numbers of acquittals, therefore do not correspond to stereotypes of what political justice looks like."
Reviewed book: 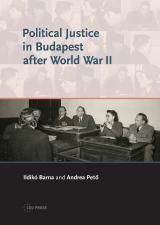