"Nigel Swain’s insightful book provides the best comprehensive discussion available of a woefully neglected subject: the transformation of agricultural communities in post-Communist Europe during the 1990s. The book is based on sociological research conducted in fifty-four villages (nine in each of six countries) between 1993 and 1996. Swain wisely notes that because of the unique moment in which the research took place, the collected evidence quickly acquired exceptional historical value, and the resulting book is appropriately interdisciplinary. Its author is a historian trained in the social sciences, and the book will appeal to anthropologists, economists, and sociologists interested in rural communities and agriculture, as well as to historians and political scientists interested in local government and times of transition. Swain succeeds admirably at illustrating the range of experience in the rural communities of post-Communist Europe during the unique historical moment of the 1990s. With reference to fifty-four colorful, real-life examples, he explains how the consequences of policies and courses of action could frequently be at odds with original intents, resulting in the paradoxical yet ubiquitous sense that, while everything changed after 1989 in central and eastern Europe,much remained the same."
Reviewed book: 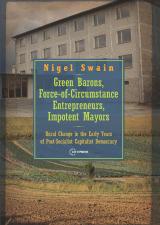