"Russian ethnography, Alexis Hofmeister argues, was particularistic in its approach, carefully considering the variety of peoples in the empire’s continental expanse, while the British surveyed their overseas empire in an attempt to develop a universal theory of ethnic difference. If the British looked for unity in diversity, the Russians explored the diversity without an overriding theory to explain variation. The essays in this rich, coherent, insightful volume reach down into the particular modalities that ethnographers used to describe and analyze the subjects of the empire. Drawings, photographs, costume, children’s games, folklore, and museums were among the visual representations that confirmed the distinctions between peoples. Ethnography, like history, was foundational in the making of nations. In the imperial settings of nineteenth- and twentieth-century Russia and the Soviet Union the attention to diversity aided those intellectuals who saw in the Volk the base for a nation. The study of ethnogenesis became central to the location of specific peoples in specific geographies and endowed them with ancient pedigrees in purported 'homelands.' This volume introduces interested readers to the complexities and particularities of the ways in which science constructed the building blocks for the nation-states that emerged from the disintegration of the Soviet Union."
Reviewed book: 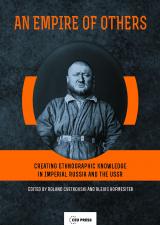