"In the thirteenth century Vincent Kadlubek added a variety of wholly legendary accretions to the Gesta that held the field as the chief authority on ancient Poland until the very end of the eighteenth century, when the comparative simplicity of the rediscovered Gesta (or the Gallus Anonymus, as it was then) seemed to guarantee a romantic authenticity. The byways of research that followed on that rediscovery have not hitherto attracted much attention in the Anglophone world, any more than has the Gesta itself. This splendid new volume will, however belatedly, offer a remedy."
Reviewed book: 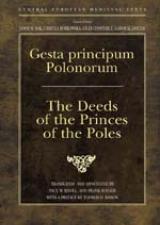