"The book breaks new ground by providing thematic, comparative, and analytical insights into the way interwar Hungarian cultural propaganda was developed at the intersection of governmental and private interests. With its wide and informed coverage of the history of Hungarian cultural diplomacy during the interwar years, Nagy’s work can be usefully read along such publications as Andrea Orzoff’s Battle for the Castle: The Myth of Czechoslovakia in Europe, 1914-1948 (2009), which discusses parallel propagandistic image-making efforts in interwar Czechoslovakia. In contrast to Czechoslovakia, whose propaganda campaigns were largely effective, Hungary’s efforts—based as they were on the promotion of the country’s cultural superiority and the need for the revision of its borders—ultimately foundered, due not just to the country’s siding with Germany in WWII, but also to a sense of cultural arrogance that could not accept Hungary’s status as a minor power and acknowledge interwar realities."
Reviewed book: 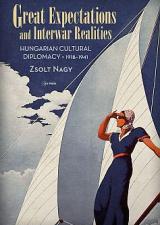