"The edited volume assembled by Michal Kopeček and Piotr Wciślik offers a novel and refreshing take on the history of the political transformations of East Central Europe in the post-communist era, a field that has been long and eminently dominated by the normative and often a historical prescripts of “transitology” scholarship (and business). Though 1989 functions as the springboard of narration, several essays trace and connect discourses back to earlier intellectual genealogies; they demonstrate how both past intellectual standpoints and present concerns provided the particular ideological admixture and the choice of positionality in the present, drawing upon an arsenal of actual or fictitious continuities, discontinuities, and/or reconfigurations of political discourse, a circumstance perhaps best exemplified in the transformations of '1989' itself: from an initial symbol of consensual politics to a floating signifier and, eventually, a convenient moment of contestation in order to redraw the lines of the political. Moreover, this volume exemplifies the fact that intellectual history is not only about the life-cycle of ideas but also about the performativity of the political, in other words, the capacity of actors to occupy timely key political/ideological spaces in relation to their political opponents and therefore not only to define the political agenda but also to capture public space and social imagination. Thinking through Transition is certainly a brave and important step in the right direction."
Reviewed book: 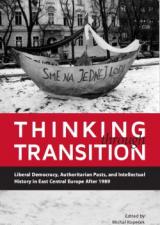