"In this powerful volume, the Hungarian-born scholar and researcher Zoltán Kékesi examines selected artworks produced over the past three decades that transform or reframe social memory of the Shoah. the author contends persuasively that paradigms and concepts of Holocaust memory have in fact shifted significantly from the era in which survivor testimony and trauma were the dominant tropes, beginning in the aftermath of the war, when recordings of survivor accounts were first made. The identity of survivor and witness began to emerge as a result of the Eichmann trial of 1961 and of psychological research into the sequelae of trauma, as practices of remembrance and 'memorial culture' developed in the West in the late 1970s and 1980s and valorized public accounts of personal experience. Persuasively elaborating the concern of contemporary artists and filmmakers to mobilize an interactive approach that engages with the present, Zoltán Kékesi's major study makes a vibrant, provocative and necessary contribution to the literature on Holocaust memory, representation and transmission."
Reviewed book: 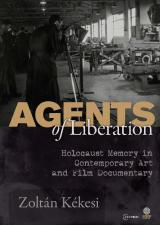