"'Far from being restricted to a small group of 'deniers', historical revisionism seems to feature strongly in the public historical discourses of many countries and regions nowadays': states the editor of this publication Michal Kopecek. Especially central and eastern Europe has a long-time experience with this concept and its changes. The various tendencies appearing (or enduring) after the 1989, are only giving new meanings to this notion. The publication is based on the conviction that the problem of revisionism in post-communist countries is a research subject that deserves a proper analysis. Although written mainly as case studies, most of the articles are proving the striking resemblances in the historiographic developments in post-communist European countries."
Reviewed book: 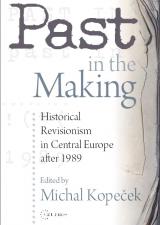