"As someone based in the United States, where the word 'communism' is automatically and uncritically associated with the worst crimes of Stalinism, edited volumes like this one do much to make it safer for younger researchers to explore controversial topics and challenge the ideological status quo. The deep irony of studying the communist past is that democracy promised freedom of conscience and freedom of inquiry. Many institutions of higher learning laud the principle of academic freedom and resist political attempts to meddle in or direct scholarly pursuits. But in the case of the twentieth-century communist past, inquiry is hardly free, and, as Todorova points out in her introduction, the majority of scholarship produced has been funded by foundations and institutions charged with investigating the crimes of communism. For pushing back against this almost exclusive focus on the negative, Remembering Communism: Private and Public Recollections of Lived Experience in Southeast Europe is a most welcome and necessary addition to the literature."
Reviewed book: 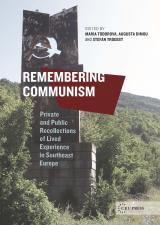