"This books is a valuable contribution to the widely studied yet contentious topic of identity politics and foreign policy in Russia. It analyses the cultural–civilisational and economic facets of Russian identity, both of which arguably go beyond Russia’s state borders and are necessarily discursively constructed vis-à-vis the Western ‘other’. The book contends that Eurasianism as a civilisational notion and Eurasian economic institutions are manifestations of Russia’s identitary enterprise. Such an explanation of Russian identity is presented as a correction to what the author calls a flawed Western-centric and instrumentalist explanation of Russia as (yet another) Westphalian state pursuing its national interests. Instead, the book examines the ‘Russian reality’, according to which Russia is a community with a supranational identity that presides over its own geographically overlapping civilisational and economic ‘worlds’."
Link to review:
https://www.tandfonline.com/doi/full/10.1080/09668136.2021.1951007
Reviewed book: 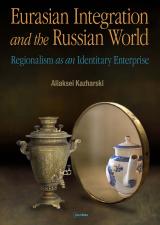