"Alternatives to Democracy is at its core a transnational work of comparative twentieth-century history philosophically rooted in the immediate contexts of the late 2000s and the 2010s. The ideas underpinning the central thesis of this book are thus explored through two interconnected analyses. The first, comprising most of the book’s content, identifies and deconstructs four forms of collectivist ideology that dominated the political landscape of twentieth-century Europe: Soviet communism, Italian and German fascism, and the more incongruous choice of interwar Spanish anarchism. Despite widely differing socioeconomic objectives and geopolitical aspirations (or lack thereof), each of these ideological movements positioned itself as a distinct alternative to liberal democracy, defined by Ramet as a political commitment to ‘the rule of law, individual rights, toleration, respect for the harm principle, basic human equality, and the neutrality of state in matters of religion’. In the context of the early twentieth century however, collectivist alternatives to liberal democracy were able to command widespread support within the countries in which their adherents came to power, granting them a mandate for reshaping society to better reflect their core ‘moral values’: fundamental goods ‘such as freedom, equality, or human rights or, in the case of the Nazis, the rights of race’. Alternatives to Democracy follows Ramet’s quintessential style in terms of both its scope and ambition. This latest offering represents a fresh interpretation of modernity’s competing political visions."
Reviewed book: 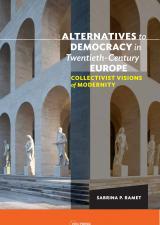