"The book begins with Nopcsa describing his early travels in the Northern Albanian lands which he undertook in 1903, expanding on his impressions of the Albanian people but never losing sight of his scientific interests. The narration proceeds with Nopcsa becoming more and more active on the local political scene. His attempts to establish his influence in the area may be seen as organic to the Austro-Hungarian policy on Albanian aiming at consolidating Vienna’s power in the Western Balkans. Useful for those who want to familiarize themselves with Nopcsa as a historical figure and especially with his experiences in Albania, – even though those who read German will likely find it more profitable to read Elsie’s first edition of Nopcsa’s memoirs (2001). Both versions are valuable primary sources for those interested in the Austro-Hungarian presence in the Balkan Peninsula prior to the First World War."
Reviewed book: 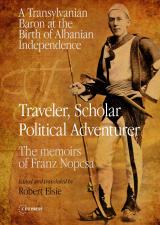