"While this text specifically investigates democratic backsliding in Hungary, its framework will surely prove crucial for understanding any former Communist states undergoing autocratic rule (e.g. Poland). Magyar’s latest text successfully tests his expanded theory of the mafia state, concretizing it and demonstrating how Hungary’s authoritarian government can masquerade as a ‘good’ state whilst eroding civil society and democratic institutions – even without exerting any physical mass violence. In just over 300 pages, Magyar manages to break through the multitudinous layers of rhetoric, excuses, and unfulfilled promises that obscure the truth of what is really happening in Hungary. No matter the exact causes of Hungary’s illiberal regression, Magyar’s Post-Communist Mafia State is a much¬ needed wake¬ up call for the Western world as a whole. It is an implicit plea for the Western community to realize that Hungary has chosen to reject its values; in order to restore them, both democratic activists within Hungary and the policymakers of the EU must prioritize new avenues for promoting liberal principals at grassroots levels. In the process, maybe the democratic spirit across the EU and the West, in general, could be rejuvenated, for we are living in dark times, indeed."
Link to review:
https://www.ceeol.com/search/article-detail
Reviewed book: 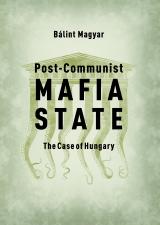